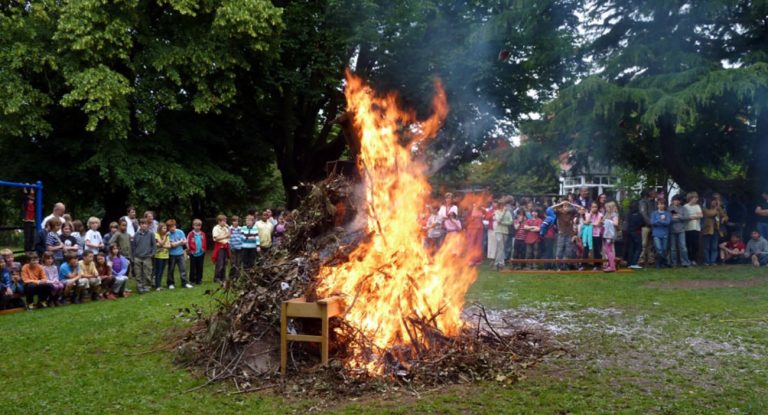 We have just reached and passed the summer solstice, and it is now summer! The summer solstice was on 20th June, and many celebrations were taking place. Summer fairs, except for the Covid restrictions this year, would normally be gathering speed at this time, and some are celebrating the St. John’s Festival on June 24th.

St. John’s is almost a forgotten festival in the calendars. The solstices and the equinoxes are easier to grasp, with their very real relationship to the sun, the earth and the seasons. Is St. John’s day merely a names day and commemoration of John the Baptist? In common with Midsummer solstice festivals, the lighting of fires is an important aspect, in recognition of the sun, the sun-spirit, the source of life for nature and all living things.  In earlier centuries the western mystery centres saw deeper meanings in these festival days. In Scandinavia, one ritual was to roll a wheel of fire down a hillside; with others, great fires were lit. What became merely ‘tradition’ was revitalised by Rudolf Steiner in the St. John’s festival, with many communities and Steiner schools celebrating with bonfires and other events, focusing more on St. John’s day on 24th June.

Why a few days after the solstice? What is the significance?
It is directly following the Summer Solstice, but this is for a purpose: by the 24th June, the high outer summer point past, the outer sunlight begins its decline. John the Baptist came to outwardly bear witness to Jesus as Christ and thus point the way for a new path. In John 3:30, John the Baptist speaks, indicating the Christ: “He must increase, but I must decrease.” As the outer light now decreases, the inner light increases. After ‘losing oneself’ in the ecstasy of the solstice time, drawn out to the sun, to the warmth and beauty of nature, one now senses another path starting, slow but sure. The outer sun decreases, and we can feel we are finding ourselves anew. The inner sun gradually grows. Thus St. John’s day becomes a marker, a pointer towards a new path, of finding the inner light. The tradition of leaping over the St. John’s fire (when smaller, and do take care!), is making the decisive inner decision to take action and pass on this route, leaping over the threshold: from the outer to the inner.

In this sense, the St. John Festival, as to be sure many festivals of the spirit, belongs very much to the needs of our time, for turning to the spirit. In decisive and courageous action.
Below is a verse commemorating this point, of jumping the fire:

Now the high midsummer sun
Burns the dreaming hours away,
Kindles blossoms bright as flames
Flashes light from leaf and spray.
Earth and Man, have you no fire
To greet these Heaven-kindled hours?
Earth has fire, and hearts have fire–
Light the flame among the flowers.

(The first of five verses from ‘The Voice of Cecil Harwood.’)