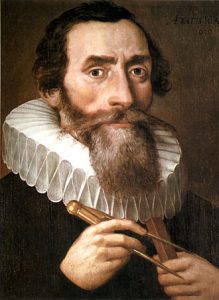 In the summer of 1619, exactly 400 years ago, Johannes Kepler (1571-1630) published his significant book, Harmonices Mundi Liberi Quinque, or The Harmony of the World in Five Books. It was an amazing work.

An admirer of Pythagoras for his work on the numerological relationships within music and forms, Kepler was especially keen to focus on the geometry. Since his youth Kepler was on the search for where he could find harmony in the spheres, in the heavenly bodies; for Kepler, this harmony was an expression of God’s creation, and if we could prove able to discover and understand this, we would show ourselves also of heavenly origin, communing with the thoughts of God.

“God wanted us to recognise the harmonies, when creating us in his own image, that we could also take part in His own thinking,” Kepler expressed.

Ptolemy also has looked at the heavenly spheres and their orbits, but Kepler wanted to explore new theorems using the elliptic orbits in the Copernican system. In his fifth book of Harmonices Mundi, Kepler describes astonishing relationships between the orbits of the planets and the relationships of musical tones, discovering harmonies in planetary motions. Different planets exhibited different harmonic proportions – for example, that the difference between the maximum and minimum angular speeds of a planet in its orbit approximates a harmonic proportion…

To only mention this doesn’t do justice to Harmonices Mundi. The first books of Harmonices Mundi explore the geometry of  polygons, looking at geometrical relationships between them and where the golden ration comes to expression. Also in the fifth book, Kepler sets out his famous 3rd law of planetary motion. But to go into all of these would require – a book!

Kepler was a genius of his time, not abashed to apply new thinking to world phenomena. Not surprisingly he fell foul of many representing orthodox views, including the church. He spoke out against the 30 years war (1618-1648), warning against religious dogmatism and how this would only lead into the abyss. He was consequently banned from taking communion, and his wife was accused of being a witch – he was only able to defend her from the accusation due to his great standing as a leading European astronomer…