In celebration of 100 years of a spiritually based holistic education

“Receive the children in reverence, educate them in love, and send them forth in freedom.” (R. Steiner)

“It is essential that we develop an art of education which will lead us out of the social chaos into which we have fallen. The only way out of this chaos is to bring spirituality into the souls of human beings through education.” (Steiner)

This year marks the 100th anniversary of the Steiner Waldorf Schools – a school movement with well over a thousand schools in over 60 countries world-wide, on all continents. Rudolf Steiner (1861-1925), a pioneer in bringing spiritual insights into all areas of learning, whether sciences, humanities or arts, held that a new holistic education with a foundation in the physical, soul and spiritual development of the child, rather than on what adults wanted for economic outcomes (which was already strongly in place since Victorian times) was essential for fostering creative and free-thinking individuals. This, he saw, was in turn essential for the challenges that humankind would face on in to the future. And the greatest challenges he foresaw would be at the turn of the century ahead, that is, NOW!

“Truth is a seed present in every human being. If we devote ourselves to the development of that essence, the seed can blossom.” (R. Steiner)

The Steiner Waldorf schools over the past century (called simply Waldorf Schools in most countries outside the UK, after the founding school in Stuttgart) have been appreciated by innumerable parents, some with spiritually minded orientation  looking for an education which acknowledged and nurtured a spiritual core in the child rather than squelching it, or simply with a view that childhood was being burdened with too many adult pressures from repeated mechanistic testing to influences of commercial interests, for instance in the last couple decades pressing computer technologies on younger and younger children.

“Where is the book in which the teacher can read about what teaching is? The children themselves are the book.” (R. Steiner)

The schools continue to spread and thrive, more so interestingly outside of the UK, and especially in Asian, African and South American countries. They come in many sizes and forms, and its principles have influenced also state education in many countries. In England, they have come under more pressure from a more mechanistic government led educational approach, reinforced by Ofsted, testing and scores (statistics!) playing a major part – that is another story! But it emphasises the need not only to celebrate its achievements but to press all the more in all educational circles for a holistic approach to education, one which nurtures not just a one-sided intellect, but head, heart and hands, as a unified whole. See also (click here for) the Facebook Waldorf 100 site to follow celebrations around the world.

“I never teach my pupils, I only attempt to provide the conditions in which they can learn.” (Albert Einstein)

Below is a link to an inspiring video on Waldorf 100 years. Follow this link to our own Waldorf 100 page, which we will be adding to over the months, where you will find further video links as well as information.

Another shorter informative film clip is also shown below.

“I am deeply grateful for Waldorf education, which woke me up and helped me rediscover my imagination.” (Michael Ende, author)

The latest film in celebration of Waldorf 100 is entitled simply, “Becoming”. It is presented at the top of this article.

The Waldorf Schools are growing and thriving around the world, and there are many moving stories to tell of new schools starting in areas where educational systems and the people have been looking for new imaginative approaches to meet the needs of the children. Below is one from a new initiative in Egypt, taken from the recent Waldorf Today newsletter.

Waldorf education in Egypt: “Everyone is amazed that such a thing is possible.” 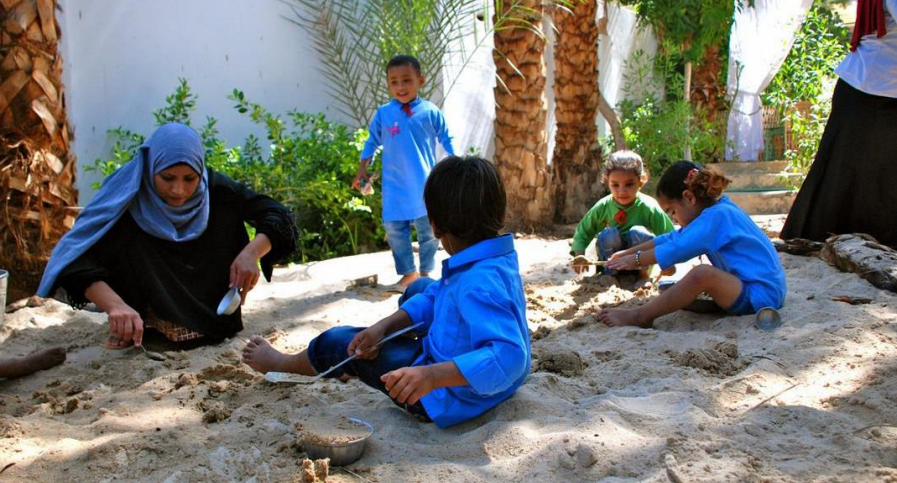 After a cultural trip through Egypt in the summer of 2015, I got to know farmers in the Luxor area who were looking for a better school education for their children. I could not ignore such a beautiful wish without checking whether it could find its way into reality. I return soon – with Roland Steinemann, the world-traveling Waldorf teacher from Switzerland, and we visit the state schools for a week.

In Egypt there is compulsory schooling, but only about 1/3 of the children go to school. Seventy children sit in a class, the teacher stands in front with the stick in his hand, children in the chorus roar, and are hit if necessary. The educational level is one of the lowest in the world. At the age of 3 or 4 the children are sent to kindergarten. There they sit on small chairs for up to four hours with their arms crossed, say ABC’s or English vocabulary without ceasing, or watch TV. They have to know Arabic and English letters before they go to the 1st grade. Some of the frustrated teachers we talk to want to try something new, something where the relationship between teacher and student is assumed, where learning is fun, where the child is respected.

Two months later I bring Marina Meier, the young dynamic kindergarten teacher from Basel, with me. We start working artistically with young teachers, introducing them to anthroposophical anthropology and pedagogy. Everything is enthusiastically received by the very open and sensitive souls and immediately tried out with imagination. Much is familiar to them from the Koran. They are now happy to find a concrete implementation for it. And then everything goes very fast.

The NGO association “Hebet el-Nil Foundation for Development” is founded. In summer 2016 a villa with 4 rooms is rented and permission for the kindergarten is granted. As soon as it is decided that children will be accepted, they come with their parents from all corners. With a heavy heart we have to limit ourselves to 60. Half of them come from Fellach families, the others from city-like populations. All of them are very poor in financial possibilities.

Every day is a feast!

A celebration of the discovery of development possibilities. Everything is new, the painting, singing, dancing, balancing and swinging, the building blocks, dolls, stories, the sand with water …

The surprised parents are invited to parents’ evenings, where they are shown through pictures how the child’s development takes place over a longer period of time and that it is not yet necessary to be able to write and read at the age of 4, but that as a basis many other skills can be learned through playing, which will be beneficial to their children throughout their whole life. Soon they will be amazed at how their child develops as a personality and socially. A hiking day is introduced to the banana plantations. When the cheerful crowd of children moves along the Nile, all the villagers come out of their stables and fields to wave to them. In the evening the parents ask the teacher about the imaginative stories of their children and ask “where there are giraffes and lions here”… Even the inspectors are amazed that something like this is possible in Egypt. The school permit is given.

Of the initial 8 teachers for the 2 kindergarten groups, 4 grow into the school. All have a degree (Islamic Studies, Mathematics, English), a state teacher diploma and pedagogical experience. The further education takes place daily – in the afternoon as well as on Saturday morning there is a review and preview, artistic practice and deepening of a topic to the anthropology and pedagogy.

In the whole year there are about 10 intensive weeks with Karin Eckstein, a Waldorf teacher from Basel, Marina Meier, other guest lecturers like Christian Hitsch, Johannes Greiner, Bruno Sandkühler and myself. With a young Egyptian teacher, Mohamed Mawazini from Cairo, a student at the teacher seminar in Stuttgart, the teachers began to translate the first lectures from Rudolf Steiner’s “Study of the Human Being” into Arabic. A world premiere. Now they are penetrating the contents of anthroposophical pedagogy and anthropology in a completely different way, much more intensively. Islam, Sufism, Christianity, Anthroposophy. . . everything is related to each other in a very touching way. 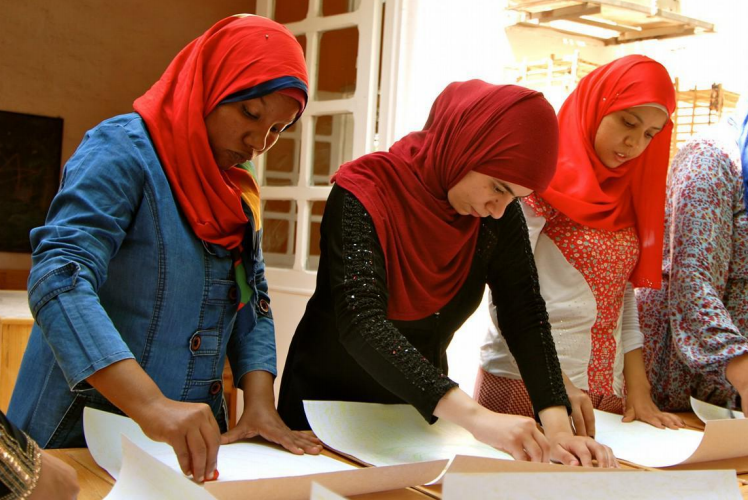 Thus in the kindergarten the Muslim festivals are celebrated, but also the Christian festivals are in their consciousness, because there are many Coptic Christians in Luxor. And since Muslims like to celebrate together with Christians, the Egyptians have made Easter the common celebration of the fragrance of spring. On this day they all go together to the water, throw themselves into the floods of the holy rising Nile, have big picnics on its banks, go singing and dancing in the boats and look out for the Nile bride. People often drown on this day. Most Egyptians cannot swim.

The kindergarten children move to the new school grounds between the sugar cane fields to sing for courage and thanks to the construction workers and dance for them. In the glowing sun, all the little hands enthusiastically help out, carrying the beams for the wooden scaffolding from here to there, throwing the bricks from top to bottom into the construction pit, spreading the mortar and laying the next row of bricks. They are blessed and proud to help build their new kindergarten! In spring 2018 the construction of the surrounding wall and the kindergarten could be started.

Soon thereafter with the small building for the administration and the school kitchen, which will serve as a temporary solution for the 1st and 2nd class, until the primary school will be built in autumn 2020. On November 25, 2018, all the children moved along the Nile to their new school by donkey cart. Singing and with rising peace doves they celebrated the move.

The Austrian architect Christian Hitsch has designed a small school village in the style of the Egyptian architect Hassan Fathy (1900 – 1989), which is completely in the style of the country and at the same time an expression of the intended pedagogy. All buildings have a triad in them, each is unique in its form and all together form a common style.

May these rooms promote the development cooperation of small and large people. May their courage and faith continue to find the indispensable support and help of European friends! Only half of the 125 children can pay the annual school fee of 140 euros. One teacher’s salary is 110 Euro per month. The investments for the construction of the school are not yet fully covered.

Nathalie Kux, born 1967, attended the Rudolf Steiner School Vienna Wall. Actress, speech therapist and stage director in Switzerland. Since 2015 she has accompanied the development of the Hebet el-Nil School in Luxor. nathalie.kux@gmail.com

Learn more about the school at www.hebet-el-nil.org 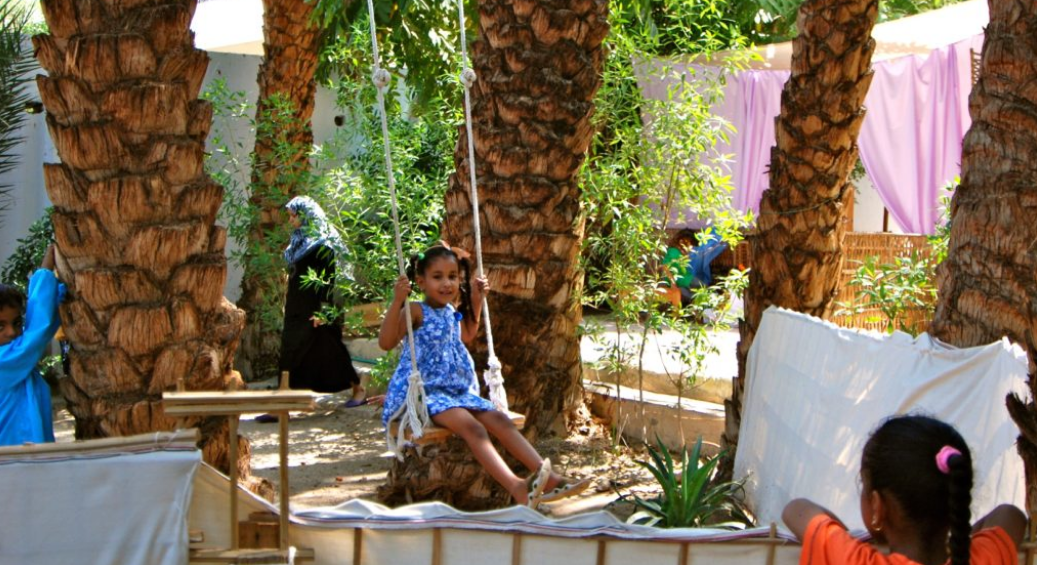 Donations for the construction: