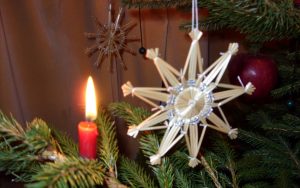 We seldom stop to think nowadays about the positions of festivals in the calendar. Are they arbitrary, or does a deeper wisdom play in to the many decisions made in the past on dates for festivals, whether Christian or other?

Christmas in the Christian calendar is preceded by the period of Advent. This is a period of preparation, each of the four Sundays prior to Christmas taking on a particular significance. In traditions there is the advent wreath with four candles for the four Sundays, and children love the ceremony that can be built around lighting the candles, a new one for each new Sunday. It provides an inspiring visual image for the build-up towards Christmas. In some traditions each Advent Sunday celebrated a new element or kingdom: from mineral, to plant, animal and finally human.

The words of a traditional Advent carol come to mind, here the first two lines:

People look east, the time is near,
Of the crowning of the year…

Each verse adds another element:

All five are permeated with love, as expressed in the refrain: love the guest is on the way; love the rose…  and so forth.

The Soul Calendar Verses for Advent and Christmas-time

The Calendar of the Soul, formulated by Rudolf Steiner, present meditations for soul moods which can be experienced through the seasons. The verses for this time of year, in Advent, are particularly inspiring, lending themselves to fruitful meditation.
For the first week of December:
Can I conceive true being
So it may find itself anew
In soul’s creative urge?
I feel that strength is lent to me
To integrate my self as member
of cosmic Self, with modesty.
For the second week of December:
Now deep within my being there speaks,
With urge to revelation,
In mystery the cosmic Word:
Fulfill the goals of your life’s work
With Spirit light from Me,
To offer up yourself through Me.
This leads up to the brilliance of inner light in the week leading up to and through the winter solstice:
To bear the light of Spirit into world-winter-night
Aspires blissfully my heart’s desire,
That soul-seeds luminous
In cosmic grounds be rooted,
And that God’s Word in senses darkness
Resounds, transfiguring all life.
Then, after the winter equinox – Christmas, and the Christmas verse.
I feel the Spirit-Child
Set free from spell in womb of soul;
The holy cosmic Word has conceived
In clarity of heart
The heaven-fruit of hope,
Which joyous grows toward farthest worlds
Out of my being’s godly ground.
In the previous verse encompassing the Winter Solstice there is a universal element – bearing the light of spirit into winter’s night, the Word resounding into outer darkness, soul seeds rooting in cosmic grounds. Now there is a very personal note, where the spirit child is set free; in clarity of heart, hope grows – joyously! – “out of my beings godly grounds.“
Something new has been added – humble, special, deep, personal, yet also divine. But it is still as a child, the feeling one has of awe and reverence when holding a new born child in ones arms. This new born child, set free from spell of the mother’s womb, is now in me, is me. Now it is my new task to nurture this inner child. A new impulse of inner life, of spirit.
One hearkens to Christ’s words in Matthew 18:3, “Yes, I say to you, if you do not turn about inwardly and reawaken the pure forces of childhood within yourselves, you will not find access to the kingdom of the heavens.” (Jon Madsen rendering).  Or as similarly expressed in  John 3:3-5. This new awakening is not just given to us: we need to make the inner effort to find it and nurture it. This has particular relevance for our current time, where there is so much materialism around us, with an ability to really ‘get us down’, that we can be tempted to hope for a grand spiritual revelation, to take care of the reawakening for us! Yet — we must find the seed, the child, in complete freedom of inner spirit, and nurture it with inner choice and effort. This is the impulse of our modern age: with the newly acquired ‘individualism’ to find, in freedom, our spirit self. That is a process. With grace, we will build a chalice into which the divine may flow and bring us further inspiration. And the three verses of the Calendar of the Soul which proceed from Christmas into the New Year provide an inspiration for this process…
(A separate further meditative reflection on the Calendar of the Soul verses for this time of year will be linked to separately here.)
For a full listing of verses, see the Soul Calendar page.

The wisdom in festival dates

The festivals around the Winter Solstice, Christmas and the New Year carry particular significance in many cultures. The date for Christmas has undergone changes since the time of Jesus’ birth. In its current position (for most countries) on December 25th, it lies several days after the Winter Solstice, the time when people of all cultures and religions over millennia have celebrated the ‘rebirth’ of the sun. In a way, it is an obvious and significant place for it to stand. But it also stands in relation to the date when New Year was often celebrated earlier, at the Spring Equinox time, Easter time, or at the Annunciation on 25th March, 9 months ahead of Christmas. Purely from the experience of the seasons it has significance: spring is the time when new life begins, and we celebrate as it were a second birth or the beginning of a new cycle at Christmas, thus bringing together the earth’s seasonal cycle with the mother’s nine month cycle fro inception until birth.

Why? Though we know it more popularly as Three Kings Day, and there are many interpretations on deeper meanings behind the three kings, it is also the day of the baptism of Jesus, which was and still is by some celebrated as the birth of Christ, i.e. when the Christ descended into Jesus, in the picture of the dove descending from above at the baptism. It is thus a very spiritual and esoteric event and symbol; yet as the centuries and millennium became more and more materialistically inclined, it was too difficult of a concept for many to grasp and relate to. Except for the Eastern Orthodox church, a decision to shift the celebrated date to  Christmas allowed a more experiential relationship to a new child born, coming shortly after the solstice: an outwardly visible event of the sun regaining its force. Following just after Adam and Eve Day on December 24th, the emphasis is on the innocent and pure child, before the fall as it were, before the temptation of the purely material pleasures of the physical world. Lived into, it could become a symbol for the birth of an inner child that can show us the way to our higher self…

Thus there was created a period from the innocent Jesus child’s birth to the Christ birth: the twelve days of Christmas and the twelve Holy Nights. This period is a journey, portrayed for instance in the very old Scandinavian ‘Dream Song of Olaf Asteson’, where Olaf awakens on the 13th day after a long spiritual experience – awakens to proclaim the birth of Christ on Epiphany, the 6th January.  Such ‘journeys’ can be worked on in our own inner imagination and meditations: the picture of the innocent infant child, as a small radiating flame needing nurturing, bringing hope; through a period of growth to realise a conscious birth or rebirth of spirit, where the flame can radiate and shine to all around, in our thoughts, words and deeds.

Standing approximately in the middle of these 12 days is New Year’s Eve. As with the Roman god, Janus, we look back and we look forward: a time of decision where we summon the will to move forward to a conscious spiritual rebirth. Another aspect: New Year’s day was ‘an octave’ or exactly one week away from Christmas day – as we’re all familiar with (if Christmas is on a Tuesday, we know that New Year’s day will also be).

The principle of ‘Octaves‘ began fairly early in Christian calendars as something that surrounded festival days, used more earlier, now less. This also wasn’t something arbitrary – the principle of the Octave has rhythms, again, as a basis: the rhythm of the week takes you through seven days of different experiences, each day of the week perceived in relation to another quality, governed by the planets. On the eighth day you don’t simply return home: through the experience, like the seven colours of the rainbow, you have magnified the original and arrive at a higher level. One can muse on the number relationships in music and a similar octave principle there. Truly, as Pythagoras expounded and demonstrated, number principles permeate the whole universe!

Naturally there are still many other ‘New Year’ dates around the world. Some, mainly in the East, are based on a lunar calendar:  The Chinese New Year begins on the first new moon between 21 January and 20 February – the period one full month after the winter equinox. The name given to the year follows the cycle of the 12 Chinese zodiac. The Chinese New Year 2020 began on January 25th. The 2021 New Year begins on February 12th and is Year of the Ox, the second of the 12 constellations. In the 2022 it is the year of the Tiger, beginning on February 1st.

Whatever the older tradition, we need to resist the modern materialist temptation to think of them as set arbitrarily, or formed ‘merely’ according to religious beliefs or superstitions. Many are based on seasonal, planetary and zodiacal rhythms, weaving together in many wonderful ways. Relating in real ways to the earthly and cosmic rhythms surrounding us used to be very important and is something we have largely lost. But it can become more significant again for us if we renew this in a conscious way. Nurturing these and other rhythms brings an inner strength and resilience…

We wish everyone a wonderful Advent, Winter Solstice, Christmas and New Year, full of inspiration and initiatives. May it bring renewed and strengthened inner spiritual commitment!

A contribution by Richard Brinton