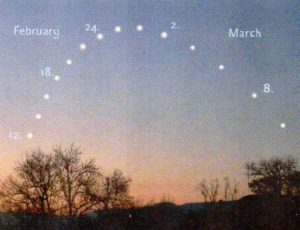 At the end of February and beginning of March this year, the position of sun and earth was favourable to view a rare guest in the evening sky, one who most of the time wanders invisibly in the vicinity of the sun: Mercury. Its reached its highest point in the arch at the turning point of the two months (see diagram).

Mercury stands as a counterpoint to the quiet of the other heavenly bodies: the calm procession of the stars, the long graceful interweaving of the other planets through night skies, taking their course through the constellations in seeming independence of the sun’s movements. Mercury, in contrast, is only to be seen in the skies of dawn or dusk when no other stars are yet visible, when day and night come together, in the meeting space of landscape and the heavens. It is a planet of relationships.

This quality of mercury can be seen in other physical phenomena. For instance, if we calculate how much larger the diameter of the earth’s 12,742 km is to the diameter of mercury’s 4,879 km, it is exactly to two decimal places the relationship of the Golden Ratio, or 1.61. This approximate relationship of 5:8 we find everywhere in nature as a universal ratio for growth, from twig segments to buds to pine cones…

There’s another interesting number relationship unique to mercury not only in space but in time: Mercury rotates on its axis every 58 days, and needs 88 days to circle the sun. This time it’s not in the proportion of the golden ratio but of 2:3, which in music is the relationship the 5th interval. Armin Husemann notes in his book The Harmony of the Human Body: Musical Principles in Human Physiology that this relationship weaves into the structure of the lungs: on the right side there are three, on the left two lobes; the branching of the whole bronchial system is built up on the principle of 2:3. The interval of the fifth is one of harmony and balance, standing half way between the unison and the octave. Breathing is a harmonising and balancing process. Perhaps it’s not surprising that in antiquity the planet mercury stood in relationship to the lungs…

While on the topic of breathing, another amazing number relationship: we breathe on average 18 times per minute, with heart beat on average 72 per minute, or four times the rate. If we calculate how many times we breathe within a day’s period, we arrive at 25,920… which is the number for the Great Year or Platonic Year – the period in which all the planets and fixed stars complete a cycle and return to a configuration they have occupied before.

There are many, many such wonders in the relationships of the circling heavenly bodies to the structures and processes in nature and the human being. Truly we are all part of one great harmonious picture, with rhythms and relationships mirrored and connected throughout!

(adapted from an article by Wolfgang Held in ‘A tempo’, Feb 2019, freely translated from the German)