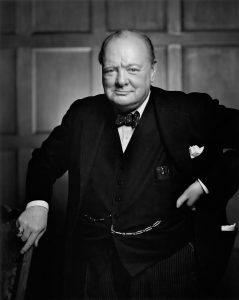 Churchill emphatically believed in destiny and its part in his life, describes Andrew Roberts in his new book: Churchill: Walking with Destiny. Not religious, he believed, though, in the almighty. “Over me beat invisible wings” Churchill once wrote.

Modern biographers, commentaters and historians often avoid talking about ‘unusual’ aspects of the lives of notable personalities. Not just religious leaders and mystics, however, had thoughts and experiences of the spiritual world behind events and phenomena but also scientists, explorers… and politicians. Take Churchill. Andrew Roberts notes that, it matters not if one of us reading about Churchill doesn’t believe in destiny: Churchill did, with conviction.

At 16 years of age, in 1891, he had what amounted to a vision of his future destiny, recalled by a classmate at Harrow. Churchill said to his probably puzzled or humoured friend:

“I can see vast changes coming over a now peaceful world. great upheavals. Terrible struggles. Wars such as one cannot imagine. And I tell you, London will be in danger. London will be attached and I will be very prominent in teh defence of London. I shall be in command of the defences of London, and shall save London and the country from disaster…”

He skirted with death throughout his life: he was in five wars, in many accidents, had several strokes and heart attacks, many times only narrowly excaping death. But he looked at this philosophically, saying this was all part of the path to his future important tasks. At the time of World War II, he said, ” Why have I been kept safe within a hair’s breadth of death except to do something like this?”

Andrew Roberts spoke of Churchill in a series on BBC Radio 4 in early October, saying: “Today we might consider a belief in ones personal destiny to be a form of psychological disorder, but thank God that it was one that Winston Churchill had suffered from!”

And therein, of course, lies a problem with modern public commentators – they are invariably somewhat embarrased and only somewhat awkwardly speaking of more spiritual matters, not recognising perhaps that there is a growing tide of the public who describe themselves as interested in and possibly working with some aspect of spirituality. The BBC apparently put out a call for people wishing to speak on particular themes to contact them, providing a list of different topics. There was not one mention of spirituality or even religious experience on it… Perhaps they are still stuck in the last century!

“The men of destiny do not wait to be sent for. They come when they feel their time has come. They do not need to be recognised. They declare themselves. They come like fate. They are inevitable.” (Churchill)